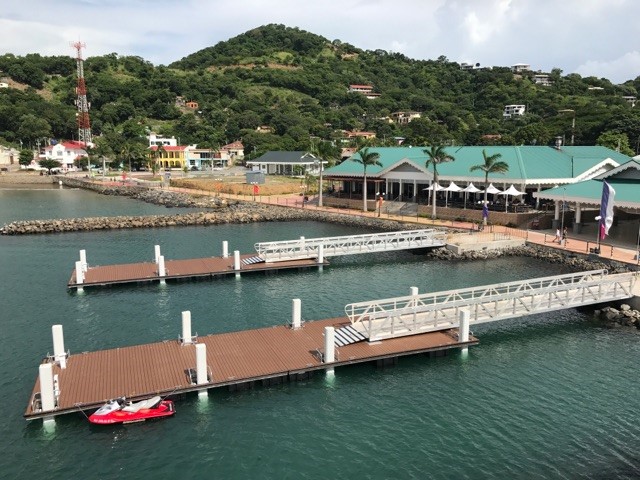 The dock system is designed to allow cruise ship passengers to disembark safely with ease.

Based in Wellsburg, American Muscle Docks and Fabrication (AMD) fabricates dock hardware, builds docks and installs dock systems. Sporting the tag line “From Wellsburg to the World™” on its website, the company ships parts and completed dock systems worldwide.

“We built the docks at our facility in Wellsburg and finished installing these docks in San Juan del Sur mid-August,” said Luke Diserio, chief executive officer for AMD. His father Paul Diserio serves as company president.

Luke accompanied the installation team to San Juan del Sur. The dock system is the company’s first in Nicaragua.

The project came about when AMD traveled with the 2017 Trade Mission to Central America, led by the U.S. Commercial Service. Every year, the West Virginia Development Office partners with the U.S. Commercial Service to organize and promote missions such as the one to Central America. The trade missions encourage companies to start or expand their international trade. Companies receive expert support services such as prescreened, one-on-one business appointments with qualified business partners, country briefings by U.S. Embassy officials and interpretation services.

AMD identified Nicaragua as a potential client for their docks.

“The city had gone through two bid cycles but nobody could meet the specifications,” Luke said. “We decided American Muscle Docks should enter a proposal.”

After returning to Wellsburg, Luke made return trips to follow up with Nicaraguan local officials. In addition, a delegation from Nicaragua traveled to Wellsburg in July to meet with American Muscle Docks. The West Virginia Development Office provided contacts and financial assistance for translating the company’s proposal and materials into Spanish. Financial assistance was also provided for each of the 3 trips to Nicaragua.

“The U.S. Commercial Service Central America trade mission was key in landing the project in Nicaragua,” he said. “The team’s in-country support was crucial.”

In 2017, West Virginia trade missions to India and Mexico have also been completed. In September, six West Virginia businesses will be participating in a West Virginia Mission to Korea and Japan.

Information on event schedules and export services is available on www.worldtradewv.com.